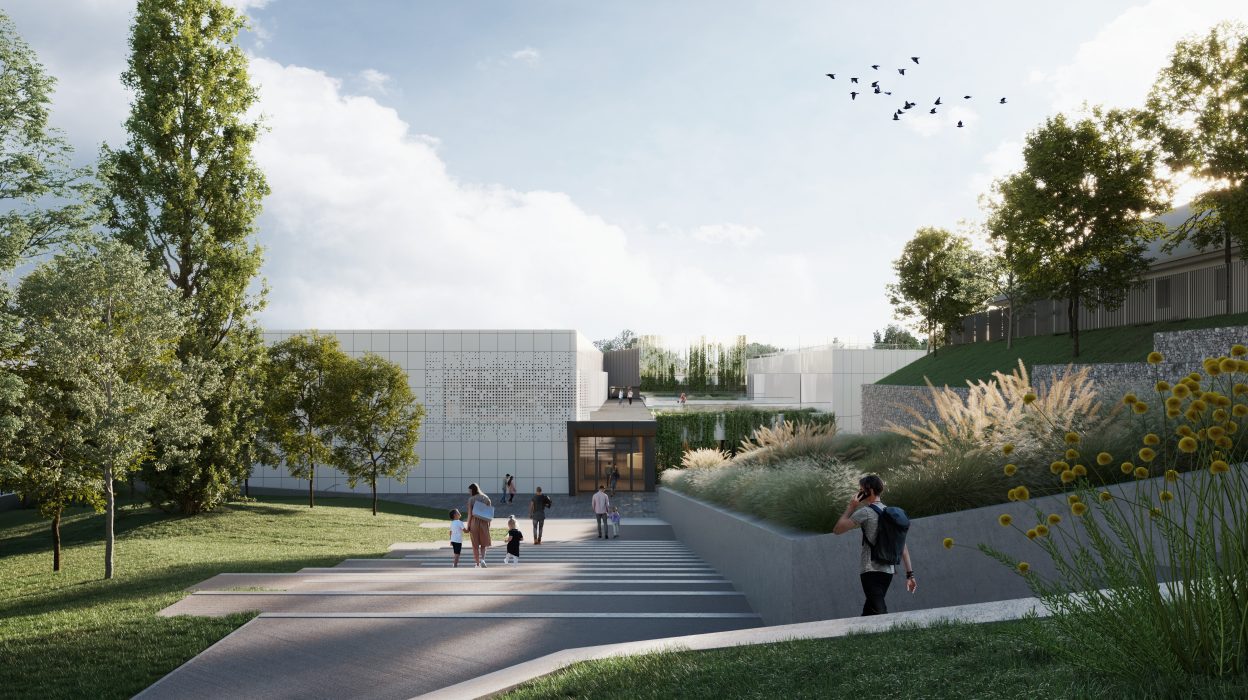 Vasas Sport Club soon to be built in Óbuda

The new sports hall planned in the complex development of the Volleyball and Dance Centre of Vasas Sport Club in Folyondár Street has received the building permit. The new building will be completed based on the conceptual design of TSPC and KREATÍV Hungarian Engineering office. The sports complex located in the Kiscelli forest of Óbuda will receive a modern centre that meets the international competition standards, which will be the venue for the volleyball and dance disciplines.

In the development, the old hall built in the 80s, which has now become in poor condition, will be demolished and replaced with a modern building that meets the needs of today. Women’s volleyball is one of the most successful sports of the long-standing Vasas SC. The team was championed in 2022, while youth training is also outstanding. The goal of the development is to create a functionally and aesthetically worthy building with good energy efficiency, with special attention to efficient operation and sustainability. The vision of the designers is a simple, transparent building structure that meets the needs of different disciplines and sports.

The building shows a clean design: two taller building units are created, which suggests a simple transparent design with its facade. The volleyball hall part will have a facade imitating a sports net, while the part of the building that also serves tennis training will have a facade structure inspired by tennis racket bandages. The service area is located between the two higher buildings, which encompasses two functions. One is the main traffic backbone of the building, from which the stands in both the training hall and the new building can be filled directly, as well as the other functions of the sports complex, while the other is concentrated on the rest and dining area close to nature, the facade and terrace of which are covered with plants. The basic concept of this streamlined system can be characterized by the keywords of openness, acceptance, and invitation.

The complex has a center volleyball court with a 1,500-seat stand that can host international competitions, and can be converted into 5 volleyball halls suitable for trainings with the help of mobile walls. In addition to the ballgame halls, there is an aerobics room, a dance hall, gyms, sauna, jacuzzi, and several changing rooms, buildings serving the neighboring tennis courts will be built as well. In the building, there will be a restaurant serving 150 people, a conference room, and offices.

During the planning, supporting structure design is a specialized field, since the affected area of Óbuda was an old mining site, and there is also a cave system nearby. The Folyondár Street location is relatively difficult to access. The greatest challenge was the terrain: due to the slope of the site, with large differences in levels, buildings to be demolished and a remaining building unit that must operate undisturbed during the construction period, the designers had to find a location for the new facility in a heterogeneous architectural environment which creates a kind of harmony in the environment.

Green and sustainable solutions on the Vasas Sports Complex:

The designers solved the lightning with natural light sources instead of artificial lightning. Being a basement premise, several roof windows and overhead lights help to illuminate thus contributing to the reduction of operating costs and energy loss.

The sports complex welcomes its guests in the embrace of the Kiscelli park forest, with native trees and rich vegetation, making them feel close to nature during their visit.

Thanks to this system it is not possible to enter the sports halls in street shoes and clothing, thus contributing to the reduction of operating costs and cleaning.

The building complex has a lot of internal glass surfaces, and transparent spaces to help orientation.

18 electric car chargers have been placed in the parking lot of the building complex.

In the portfolio of the general architectural designer TSPC Kft. there are several sports facilities, among others: the Tiszavirág Sports Pool in Szeged, the City Swimming Pool in Zalaegerszeg or the new campus of the University of Sports Science, which will be built according to the plans of the architectural office.